ARTIFICIAL INTELLIGENCE – WILL IT IMPACT YOUR BUSINESS?

A fair share of entrepreneurs wonder about the actual potential of Artificial Intelligence. They want to be acquainted with the way it can impact their industry and how they can rely on it to reinvent their own companies.

However, in recent times, the media has conveyed an unrealistic portrait of what AI can actually carry out (It will soon dominate the world!). AI is however already changing online searches, advertising, e-commerce, finance, logistics, just to name a few.

Having witnessed AI’s impact, I can now affirm: it will surely transform several industries, but it’s not a magic trick. In order to properly grasp the implications that it can have for your business, let’s ignore all the marketing fuss and check what AI is actually doing as we speak.

Oddly enough, despite the magnitude of AI’s impact, the types that are currently being deployed are still extremely limited. Almost all recent progress are of a type in which some input data (A) is used to quickly foster a simple response (B). For instance: 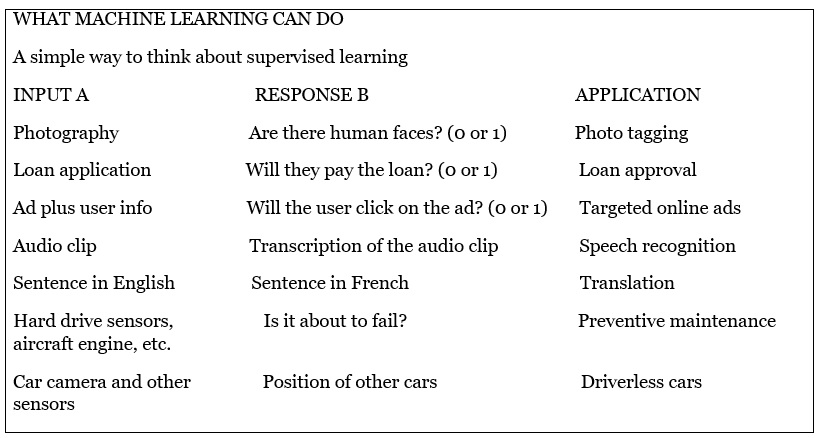 Being able to carry out an input A and have an output B will overhaul several industries. The technical term for building this A → B software is supervised learning. A → B is actually quite far of those robots that sci-fi promised us.

Human intelligence also does more than A → B. These A → B systems are quickly perfecting themselves and the best, right now, are built using a technology called deep learning or deep neural networks, which are vaguely inspired by the human brain.

But these systems still have a long way to go before they reach those sci-fi levels. Many researchers are exploring other forms of AI and some have been useful in confined contexts; an innovation may take place, one that allows higher levels of intelligence, but so far a clear route to attain this goal has yet to be found.

Right now, the supervised learning software has an Achilles’ heel: it requires a great amount of data. The system needs to be provided with a fair share of A and B examples. For instance, building a photo tagging software demands something close to tens or hundreds of thousands of photos (A), as well as labels or tags that tell if there are people in them (B). Building a speech recognition system demands tens of thousands of hours of audio files (A) as well as their transcriptions (B).

All in all, what can an A → B system do? There’s a rule of thumb that properly shows its impact:

If a common individual can carry out a mental task in less than a second, then that’s something we can automate using AI, as we speak or in the near future.

A great amount of valuable work that is currently being carried out by humans – checking security camera footage to spot suspicious behaviours, deciding if a car is about to run over a pedestrian or not, finding and deleting abusive online posts – all this can be done in less than a second. These tasks are in a great spot to be automated.

Nonetheless, the aforementioned activities are often encompassed within a broader entrepreneurial context or process; and it is also important to realize how important for your business these connections are. The work of Artificial Intelligence demands a meticulous choice of A and B, as well as data to help AI to understand the A → B relationship.

Picking A and B in a creative manner has already revolutionised several industries and it can do the same for many others in the future.

After acknowledging what Artificial Intelligence can and cannot do, the next step that entrepreneurs need to do is to embed it in their strategies. This means perceiving where the value is created and what is difficult to duplicate. The AI community is outstandingly open-minded and the most prominent researchers publish and share their ideas and even open-source code. In the world of open-source code, these are the scarcest resources:

Data. Among the most important AI teams, many may actually be able to replicate the software created by others in 1-2 years. But gaining access to someone’s data is extremely hard. Thus, data, more than software, are seen as a defensive wall for many companies.

Talent. Downloading and applying open-source software to your data will not work if you don’t do anything else. AI must be tailored to fit your company’s context and data. That’s why there’s a war as we speak, fought by those who try to find the rare AI talent that can perform this work.

A lot has been written about the potential of AI, as a source of reflection on the best and worst of mankind. For instance, we have already witnessed AI providing conversation and comfort to those who are lonely; and we’ve also seen it being part of racial discrimination.

However the biggest damage that it can cause to people in the short term is unemployment, taking into account that the amount of work that we can currently automate is much bigger than in the past. As leaders, we must make sure that we are building a world in which every human being has an opportunity to thrive. Acknowledging what Artificial Intelligence can do and how it fits your strategy is just the beginning, not the end of this process.